Immortals Fenyx Rising Review: Ubisoft’s Answer to Zelda, for Everyone Without a Nintendo Switch

Immortals Fenyx Rising is a next generation title from Ubisoft that draws a lot of inspiration from 2017’s Nintendo Switch launch title, The Legend of Zelda: Breath of the Wild, considered one of the best video games of all time. It was all the more special for how Breath of the Wild was a departure from the Zelda way of doing things, introducing voice acting to the franchise, and encouraging a freer approach to its massive open world. Nintendo’s gamble paid off, and as of September, Breath of the Wild has sold over 20 million copies. Given those numbers, it was only natural that other studios would come to copy its ingredients, in an attempt to serve the audience that doesn’t own the Switch or its predecessor, the Nintendo Wii U.

Ubisoft Quebec — the Canadian studio best known for Assassin’s Creed Odyssey — is here to throw its hat into the ring with Immortals Fenyx Rising. It’s not the first one either, as the free-to-play Chinese title Genshin Impact beat it to the punch by a couple of months. Like Breath of the Wild, Immortals Fenyx Rising is set in an open world that has at its centre the villain’s massive lair, replete with red smoke. Fenyx — pronounced as “phoenix” — has the Wings of Diadalos that allow them to glide, as with Link’s glider. And just like Link’s Magnesis ability, Fenyx too can also lift up nearby objects thanks to Herakles’ Strength. Fenyx too can tame wild horses and then summon them at any time.

In fact, there is so much copying going on that some Immortals Fenyx Rising fundamentals go against Ubisoft’s own established ideas. In Assassin’s Creed games, you can climb up mountains and structures without having to worry about stamina. But because Breath of the Wild had a stamina meter for Link, Immortals Fenyx Rising has one too. It’s an understandable inclusion in the climbing department, or in Link’s case as he is literally holding onto the glider, but it makes no sense for Fenyx, because the Wings of Diadalos spring out of a futuristic gadget attached to their back. Sure, you can eat a blue mushroom to restore your stamina, but gliding’s connection to stamina has no logical bearing. It exists because it was there in Breath of the Wild.

For all my harping regarding the similarities, Immortals Fenyx Rising brings its own ideas to the table. The biggest difference is in the combat, wherein Ubisoft Quebec draws much more on Assassin’s Creed. As such, combat is a mix of light attacks (RB / R1) and heavy attacks (RT / R2), interspersed with the timely use of dodge (X / Square) and parry (LB + RB / L1 + R1) to regain stamina and retain your health. A perfectly-timed dodge slows down your opponents, allowing you to get a few more licks in before they recover. Additionally, Fenyx has access to “Godly Powers” such as an arrow that can be remotely controlled, a massive hammer that does area damage, tall spikes that can be summoned out of the ground, the ability to pull yourself towards flying enemies, or turn yourself invisible.

Having ideas is one thing, you’ve to execute them too. Immortals Fenyx Rising combat is generally bland, and it’s only when you get involved in boss battles that prove to be more satisfying, as they involve a bit more strategy. But even that turns rote if fights go on for too long, because you settle into a loop. Charge up your special attack, use it, add some light attack stabs, dodge incoming attacks, refresh your special attack. Rinse and repeat. It’s thrilling for a minute but if I have to execute the same strategy for five minutes non-stop, you’ve lost my interest.

Immortals Fenyx Rising also lacks in execution with its second major attempt to differentiate itself from Breath of the Wild. Unlike the Zelda game, Fenyx’s tale opts for a light-hearted tone. Immortals Fenyx Rising does its best to infuse fourth wall-breaking humour into the proceedings, with the help of the dual immortal narrators Zeus (unreliable) and Prometheus (reliable). As a champion of humankind, the latter believes in Fenyx, while Zeus has no patience for Prometheus’ tale and belittles every obstacle in Fenyx’s path. On one occasion, as Fenyx walks through a door, Zeus takes over the story and describes a monster as huge in size. The next moment, Prometheus sticks it to Zeus by changing the monster’s size. But the jokes trade in similar traits too much, and the humour eventually feels half-baked.

But the bigger problem with Immortals Fenyx Rising’s non-player characters (NPCs) is the general lack of them. Zeus and Prometheus are relegated to voices for the most part. Four more gods — Aphrodite, Athena, Ares, and Hephaistos — are central to the narrative, but their presence is minimal. They are only involved at the start and the end of a task. The only consistent NPC is Hermes, who strings along the tale and offers his snarky comments on the other gods. But between all that, you will spend several hours roaming around not encountering anything that doesn’t want to kill you. Unlike Breath of the Wild, there are no outposts that I came across, and no other wandering NPCs you might run into. The world of Immortals Fenyx Rising feels desolate and empty, like an elaborate stage made just for you. 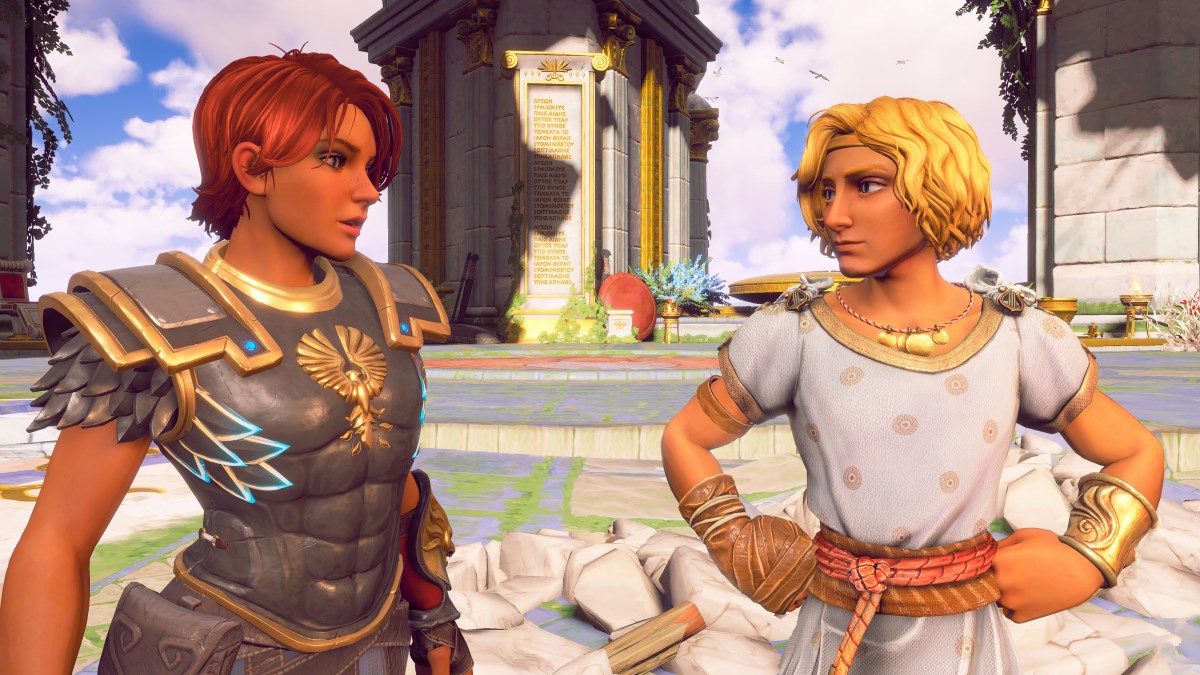 That said, there’s a lot to do in said world. As is the case for Ubisoft open world games, the map of Immortals Fenyx Rising is littered with side quests and activities. Taking yet another cue from Breath of the Wild’s “shrines”, the game has Vaults of Tartarus, puzzles that give you access to in-game currencies which in turn can be used to upgrade your stamina or weapons. I enjoyed most of them, save for the restrictions to climbing that are imposed within these vaults. Elsewhere, you’ve a series of mythological challenges — they award you “Coins of Charon” that allow you to learn new skills and “Godly Powers” — which include rearranging paintings, navigating the map, controlling an arrow through hoops, or listening to a tune and then recreating it elsewhere.

But there is in fact too much of everything, as is becoming increasingly true for most Ubisoft open world games. This not applies to the side quests — half a dozen more seem to crop up every time you solve one — but also the main narrative. When Fenyx is asked to collect something, it turns into three things of the same kind. When you defeat a boss of one variety and are pleased with yourself, Immortals Fenyx Rising notes that you need to kill a few more to complete that side quest. It’s game padding clear as day. And at times, it will lock you out of certain opportunities because you haven’t unlocked a “Godly Power” that is required. Immortals Fenyx Rising doesn’t tell you what that power is, or where you can earn it either. It’s not very helpful and it only further adds to the annoyance.

And it’s not like you can choose to tackle only a few of each. Your character’s health, stamina, abilities, and weapons are tied directly to in-game currencies that are earned by completing different kinds of side quests. You need Coins of Charon for skills, Zeus’ lightning to boost stamina, “Ambrosia” to increase health, and shards of several colours to upgrade your weapons or potions. There are 14 in-game currencies in total, of which 12 can be found in the open world, one comes only from completing daily and weekly challenges, and the last of them is bought with real money and used in a microtransactions-driven in-game store that offers new cosmetics and horse companions. All the upgrades require significant resources, which is Immortals Fenyx Rising’s way of pushing you to do more quests. 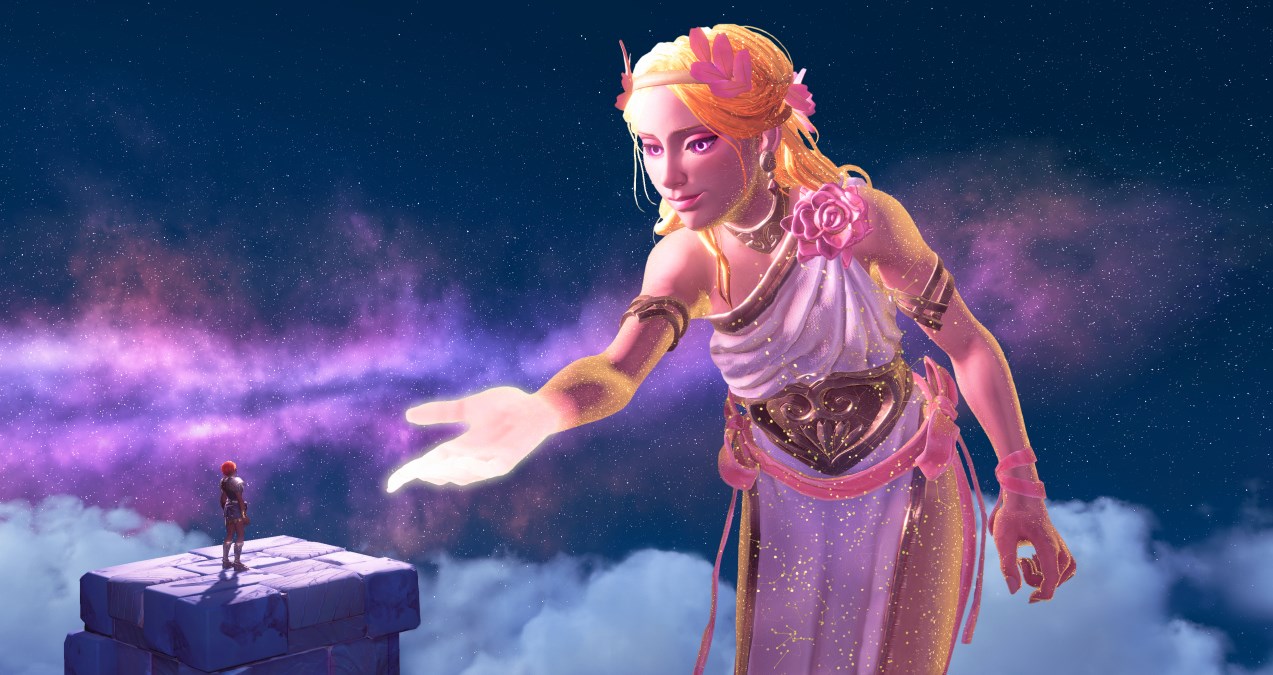 It doesn’t help that the game doesn’t register a challenge’s completion unless you’ve explicitly registered your interest beforehand. During a story mission, I encountered and defeated a boss character. After the mission ended, I returned to my home base where I got the chance to check up on what the daily challenges are. Turns out that boss was on the list but I wasn’t entitled to the reward because I hadn’t signed up for it. If that is intentional design, it’s absurd. Hopefully this is a bug not a feature. Speaking of bugs, I didn’t encounter any during my time with Immortals Fenyx Rising, but the game did crash on me a couple of times, once even rebooting my Xbox as it crashed. The first instance happened prior to the day one update, and the other one after.

For all the deserved flak coming Immortals Fenyx Rising’s way for delivering a brazen Zelda clone, the Ubisoft game deserves some praise for executing most of the ideas well — and even adding to them. For instance, you can heal Fenyx without having to dive into a menu. Weapon durability is also a non-issue here, which was a controversial inclusion on Breath of the Wild. Fenyx can also jump and double-jump, unlike Link’s hop (at best). But the funny thing is that Immortals Fenyx Rising makes me want to revisit Hyrule. Not everyone can do that though, because they don’t wish to splurge on a console (one whose controllers have a drift issue that hasn’t been fixed) or because they live in countries such as India, where the Switch has never been launched, and Nintendo doesn’t have an official presence.

For all of them, Immortals Fenyx Rising is a game that they must try.

Affiliate links may be automatically generated – see our ethics statement for details.