After Taking on Airtel, Mukesh Ambani May Take on Amazon Next

Amazon.com had better watch out.

The $200 billion (roughly Rs. 13,00,300 crores) e-commerce market Morgan Stanley is forecasting for India by 2027 just got a new contender – with a very different plan.

Energy tycoon Mukesh Ambani has already disrupted the country’s telecom industry. His next big foray may be online retail.

But India’s richest man may not create a marketplace of his own. According to an Economic Times report, Ambani’s Reliance Industries Ltd. wants to leverage its Jio wireless service and hand out digital coupons, which customers can then use to get discounts at their neighborhood stores.

Why is this a smart move? There are clues in Morgan Stanley’s research. India has 432 million Internet users, but only 60 million online shoppers. The e-commerce industry, including online food delivery, is just $15 billion (roughly Rs. 97,517 crores) a year, or 40 percent less than Alibaba Group Holding Ltd.’s Singles’ Day sales in China.

The inflection point in a 10-year journey from $15 billion to $200 billion will come after five years because that’s how long it takes for new Internet users to get comfortable shopping in cyberspace. Most Indians who have Internet-ready phones have only bought them over the last couple of years, thanks to a 36 percent decline in the cheapest 4G handset in the past 15 months. In other words, they’re experiencing the web for the first time.

The payday Amazon and its homegrown rival, Flipkart, are waiting for will come after new users’ buying habits change. But Ambani, who has already acquired 133 million customers for his Jio service in its first year of operation, and is aiming to lure hundreds of millions more by effectively giving away custom-built Jio Phone handsets, is in a hurry. He may want to speed up e-commerce by joining hands with bricks-and-mortar.

Redeeming a gift voucher at a neighborhood store is a familiar transaction; a digital coupon is a slight tweak. Even new smartphone users – regardless of age or literacy – won’t leave money on the table at their grocer. Besides, digital payments have already become so simple in India that small retailers who don’t accept cards can also very easily redeem QR-code-based vouchers. Alphabet’s Google has pioneered an audio-QR-based payment mechanism for India that rides on instant person-to-person or person-to-merchant payments. It’s reasonable to expect that Indians’ familiarity with digital payments will grow more quickly than their penchant for online shopping.

Morgan Stanley cites an AlphaWise survey to show that even after being exposed to the Internet for more than five years, a good 20 percent of people are likely to use their smartphones to transact, but not to buy new stuff. In 2027, too, only 475 million people – out of an estimated 915 million internet-enabled Indians – will be shopping online. 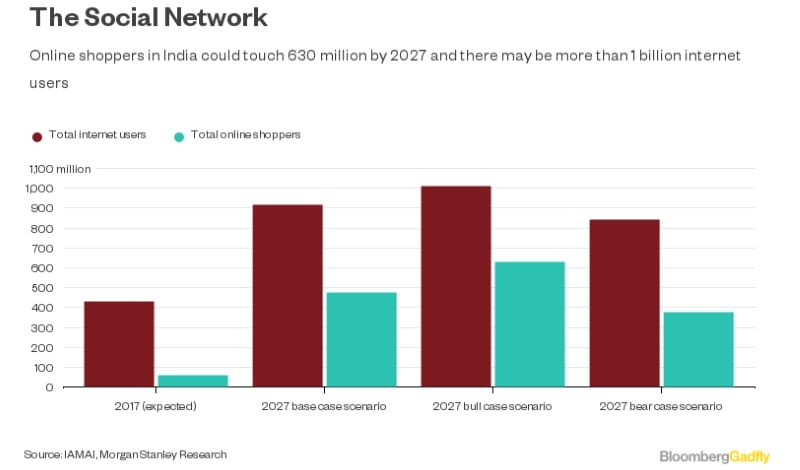 That leaves roughly half the market for the kind of online-offline hybrid strategy Ambani has in mind. So long as the discounts come from brands, the cost of such an e-commerce push is also going to be more manageable than for pure-play digital marketplaces.

Those marketplaces will remain a money guzzler. Amazon CEO Jeff Bezos has pumped $5 billion into India, and he’ll probably need to double that quickly. The US e-tailer has 160 million product listings on its Indian marketplace, compared with more than 400 million in North America.

Jio, by contrast, will merely be giving its customers a digital key into an offline shopping world that already has the rich variety they want. As Ambani rolls out his strategy, expect the current two-way battle between Amazon and Flipkart to turn into a three-horse race.

This column does not necessarily reflect the opinion of Bloomberg LP and its owners.