Why I Hope Star Wars: The Last Jedi Is Nothing Like Empire Strikes Back

After a long wait, Star Wars came back with a bang with the 2015 release of The Force Awakens. Made by Star Trek reboot director J J Abrams, The Force Awakens had its share of flaws, but the movie represented a strong return to form for the franchise, after the disaster that was the prequel series. Two years later, we’re about to get the second entry into the sequel trilogy, with The Last Jedi releasing this Friday. We’ll have our review of the film later this week so you’ll know what expect, but for now, our expectations are tempered with just a little bit of concern that the film is going to follow on the notes of Empire Strikes Back.

Now, that’s not a bad thing in and of itself – Empire is a definite high point of the Star Wars series. Granted, it doesn’t quite have the same sense of wonder and unfolding possibility of A New Hope, but it builds on the first film in a powerful way and delivers some great emotional notes. The problem is that the Star Wars reboots have already taken that path with Force Awakens, and it’ll be disappointing if the next film in the series also stays too close to the originals, instead of giving us something new and interesting.

Part of the appeal of The Force Awakens lay in its familiarity. “Here, fans, is a film that touches the same kind of emotional beats, and uses similar visual identifiers, as the original films that you loved so much,” the film seems to say. After the prequels, we needed something like this to restore our trust in the series. But despite having enjoyed The Force Awakens enough to rewatch it multiple times, there’s no denying that the criticisms of its similarities to A New Hope are justified.

It starts off early with the scenes of Rey (Daisy Ridley) walking off into the sunset in Jakku. If that didn’t make you think of Luke Skywalker (Mark Hamill) and R2-D2 on Tantooine, you probably haven’t watched Star Wars. The desert planet where people survive intense hardship while dreaming of a bigger world, before getting a call to adventure in the form of a droid from space who holds a military secret is a little too familiar.

Speaking of familiar, Kylo Ren shares a lot with Darth Vader, as a menacing presence in a dark suit with a cape and a red lightsaber, who has no problems getting his own people killed if that helps him achieve his goals. He’s powerful and threatening, yet mysterious and the film really drives this home by showing how he aspires to be like his grandfather – Vader.

On the other side, the main trio is a little different but has its own parallels as well. Finn (John Boyega) isn’t exactly analogous to Princess Leia, but he does take the initiative and manages to rescue himself from a few tight spots. Poe (Oscar Isaac) is a smirking and cocky pilot who’s got some similarities with Han Solo, though again, there are some differences as well. Meanwhile, Rey lines up well with Luke – she’s desperate to get to space, and to find a connection to her missing family. Like Luke, it turns out that she’s a gifted pilot (she flies the Millennium Falcon, which Luke didn’t get to do), and learns to use the Force quite rapidly, just like he did. 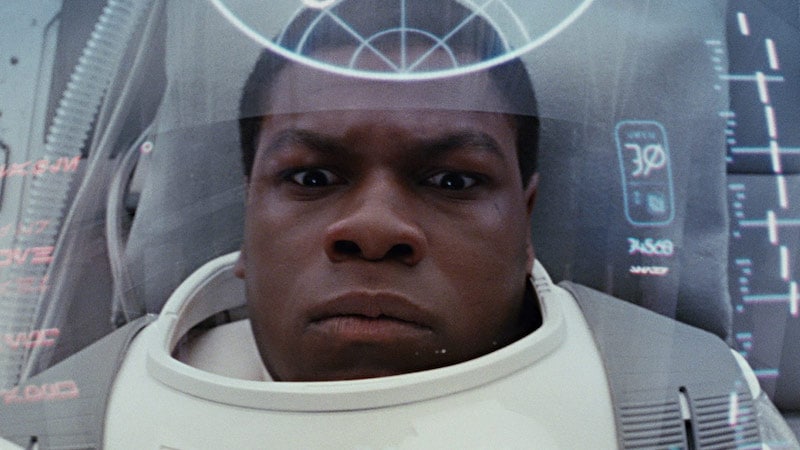 There’s also the grizzled old mentor – a veteran of former wars who wants to be left alone, but gets pulled in due to his personal connections to the people at the centre of the ongoing conflict. Without fully giving away the big twist from the last movie, let’s say that there are a lot of parallels to be found here as well. Finally, things come to a head when space fighters have to make a run through some trenches to blow up a giant sphere with a single well-placed attack against a super-sized weapon of mass destruction. About the only thing missing was to end with a ceremony handing out medals.

It made for great nostalgia, and we’re actually okay with coming back to the franchise that way, but we’re a little more worried the next film. There’s a tendency for trilogies to match these same beats, where the first film introduces the world, the second provides setbacks and hardships, allowing the third film to be about a triumphant turnaround. And although that’s fine as a general idea, Force Awakens clearly followed A New Hope extremely closely, and we hope The Last Jedi doesn’t mirror Empire Strikes Back in that sense.

And it seems we are not the only ones thinking along these lines. In an interview with Rolling Stone, The Last Jedi director Johnson talked about the challenge of following up Force Awakens while avoiding turning into Empire Strikes Back. “You don’t want to let yourself be guided by those deep-set grooves in your brain, but you also don’t want to make creative decisions just to spite those,” he said. At another point in the interview, he also talked about Rey’s parents, and there, brought up Darth Vader’s famous “I am your father” dialogue from Empire Strikes Back. He also mentioned that the film would focus more on the past of the leads – such as Luke’s parentage, and Han’s smuggler connections, both themes that were explored in Empire Strikes Back.

These aren’t red flags in any sense, and we’ve got quite high hopes from the The Last Jedi. After Force Awakens and Rogue One, Disney has certainly earned the fans’ trust and we hope Johnson is able to live up to that, while also making something that stands out as a completely original entry to the series.